"how lucky i am to have something that makes saying goodbye so hard"
A.A, MILNE, WINNIE-THE-POOH

When we decided to do this page I knew it would be hard and full of tears, but I forgot some of the good memories we had with these dogs. . I can tell you times they protected us, loved us, cried with us and laughed with us. Each one was a special part of our family. Until we meet again..............

DOGS DO NOT DIE
We have a secret, you and I,
That no one else shall know,
For who, but I can see you lie,
Each night, in fire glow?
And who but I can reach my hand
Before we go to bed,
And feel the living warmth of you
And touch your silken head?
And only I walk woodland paths,
And see, ahead of me,
Your small form racing with the wind,
So young again, and free.
And only I can see you swim
In every brook I pass.
And, when I call, no one but I
Can see the bending grass.

​SLADE
​2007 - 2020
GOING ON 14 YEARS OLD
Good bye my sweet Slade. You will be so missed.
​
JUMPER VON KING'S CASTLE
"BOSS" came to us from Germany. He is exactly what we were looking for to add to our breeding program. He has a wonderful temperament, wants to be with you and wants to please, is very solid, nice big bone, lovely pigment and gorgeous head,
.
He has matured into a magnificent boy!
When he first arrived here he was quite the escape artist, but has settled in very nicely  (he opened his crate at the Frankfurt airport and ran around for 2 hours before someone caught him!..) 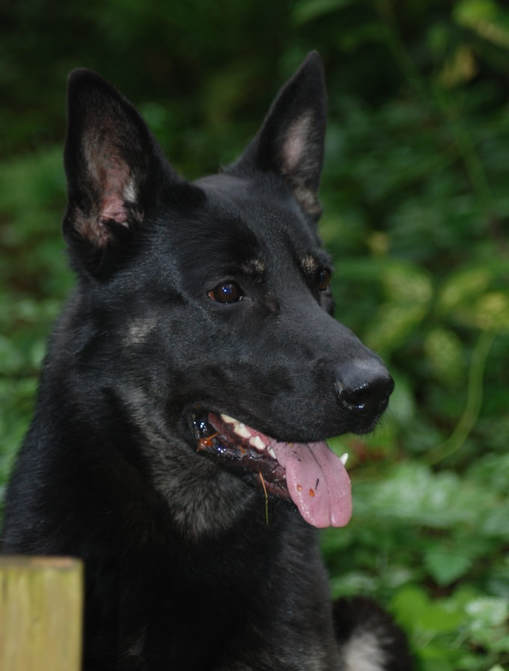 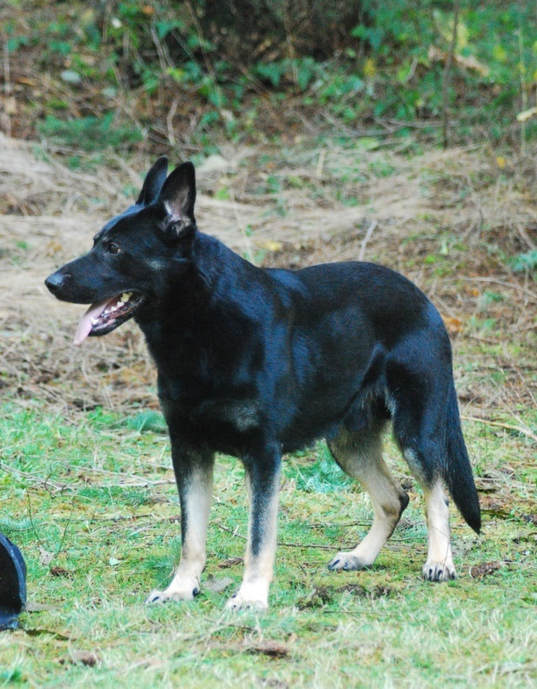 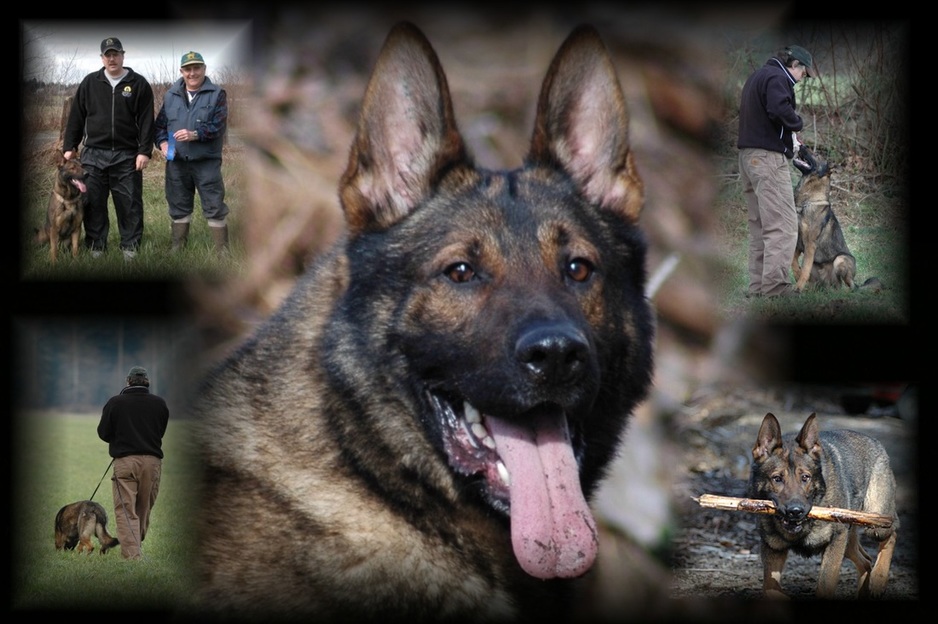 I THOUGHT I HEARD THUNDER RIGHT AROUND THE TIME TEAKO PASSED..., BUT THINKING ABOUT IT,  IT WAS PROBABLY TEAKO RIPPING OFF A PART OF RAINBOW BRIDGE ...
HE WAS A COOL DOG. DIDN'T LIKE TOO MANY PEOPLE, BUT WAS VERY LOVING TO HIS FAMILY. WE HAD TO SEPARATE HIM FROM HIS LITTER MATES AT 6 WEEKS OLD BECAUSE HE WAS TOO ROUGH WITH THEM..
HE DIDN'T KNOW I WAS WATCHING, BUT A COUPLE OF DAYS AGO I SEEN HIM WAGGING HIS TAIL AT ONE OF THE PUPPIES...
WE LOVE YOU TEAKY..TEAKY...GEEKY...GECKO 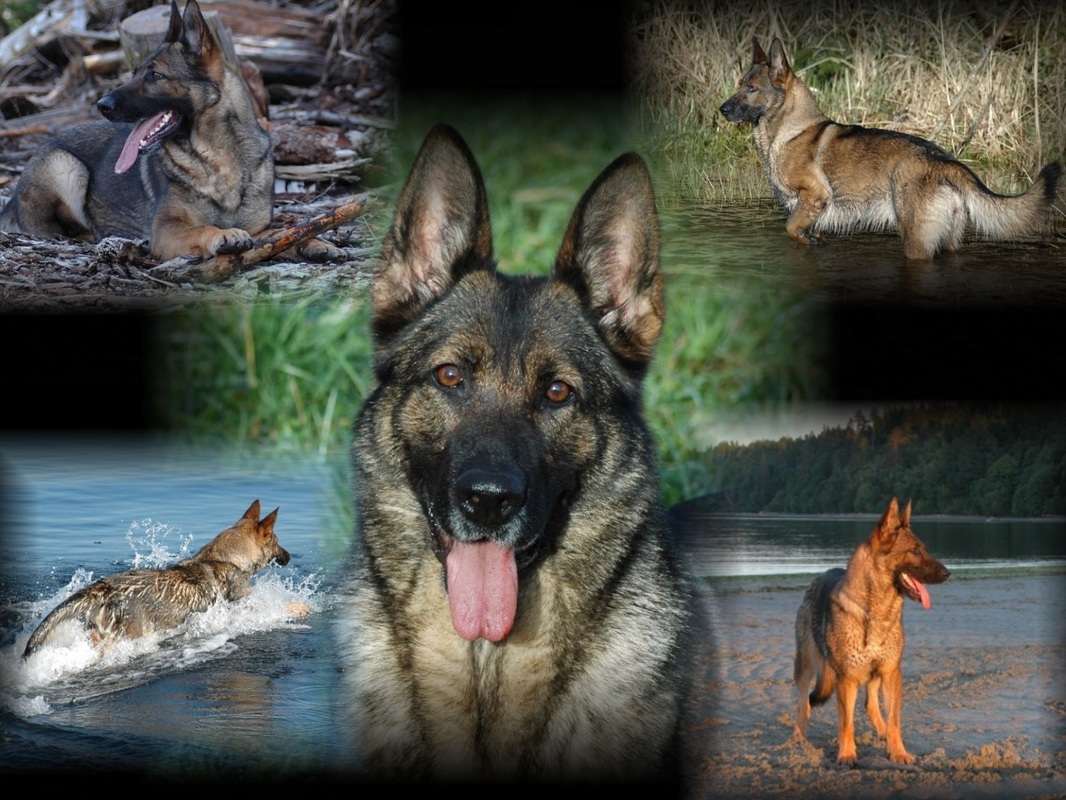 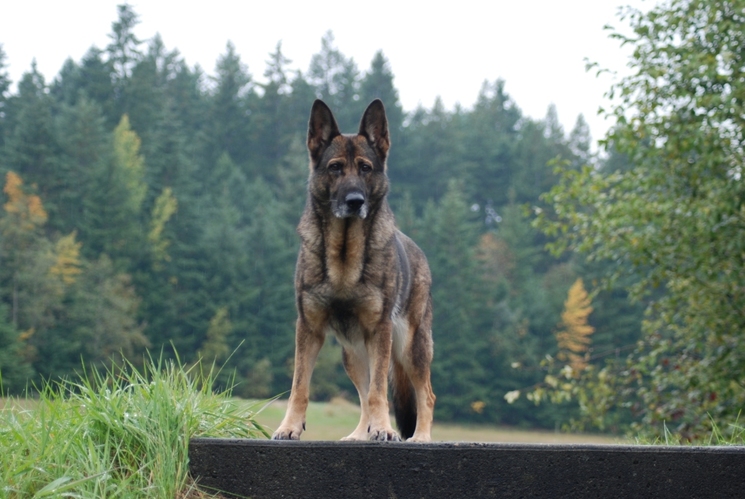 Zorra pictured at 10 1/2 !!!!!
October.1.2010  --It is with a very sad heart we tell you our sweet Zorra has gone to run with the others at Rainbow Bridge.. her last day was so sunny and we had a great time playing with her ball. the memories you gave us will live on and on..
We love you "ZORRBEEZEE" 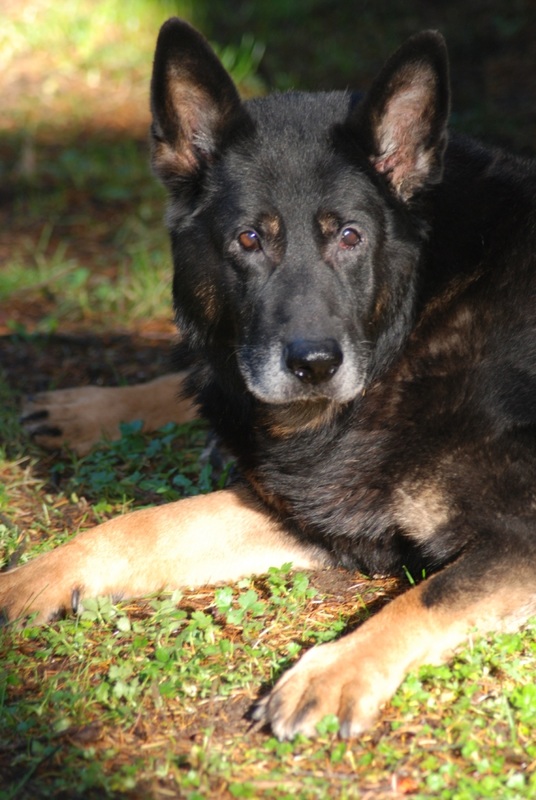 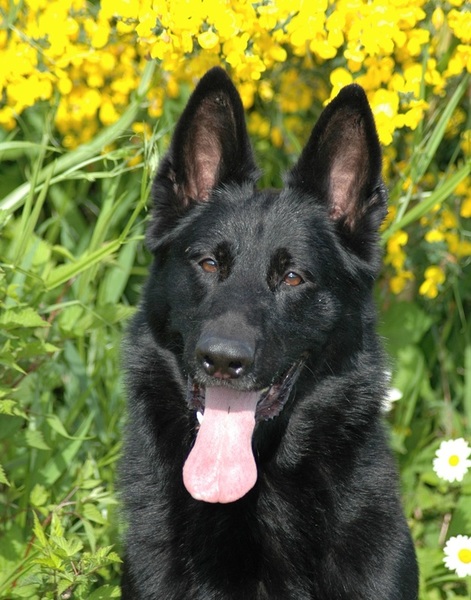 ​My dear Luke was diagnosed with cancer and 6 weeks later he was gone. We spent that time going for long walks, swimming and having ice cream cones. It is so hard when they leave you when they get old, but when they are so young and full of life it is devastating.
Luke was my soledog. 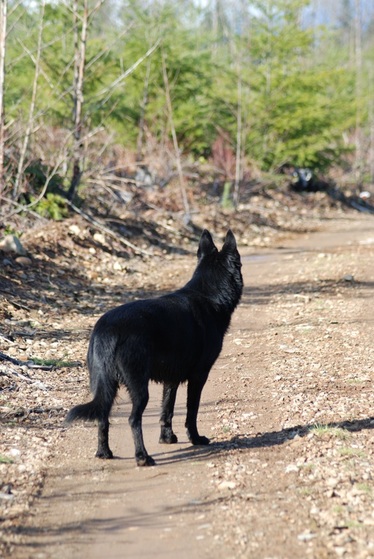 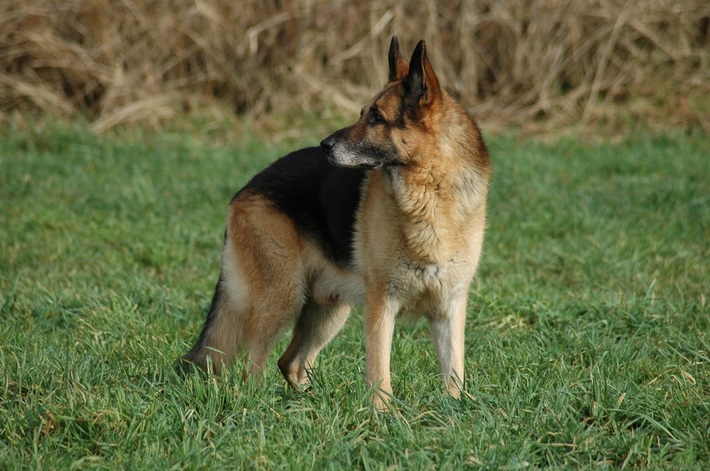 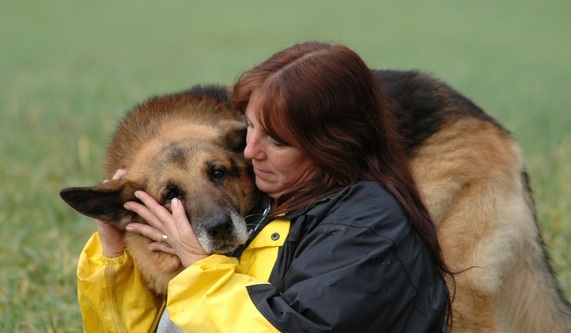 Our dear kind "Bear Dog", many people enjoyed your warm hugs and kisses.  When strangers came you were so eager to run over and give them a big kiss. You loved everybody!  I know you touched people in a very special way.


Our sofa seems bigger.
I held you when you took your first breath, your last breath and many many in between...... Thank you for your special time with us.
We miss you "Keen bean the monkey meen." 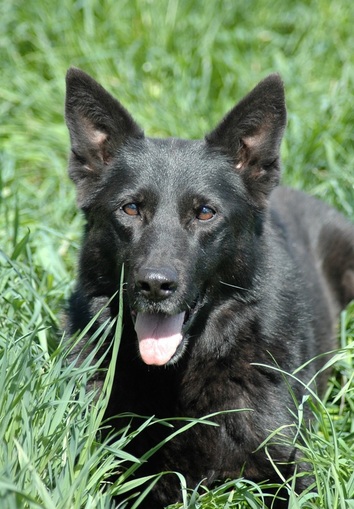 You can now run with your toy in your mouth as long as you want!
"Sheena" was our last Search & Rescue Dog. She was an  R.C.M.P certified, civilian Search & Rescue dog for five consecutive years. Her greatest thrill was going to schools and doing demos for the kids as she loved the attention. She was always ready and eager to work.
Good bye dear little "Bean Baby". 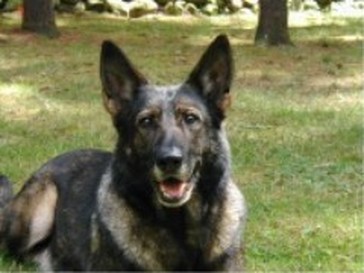 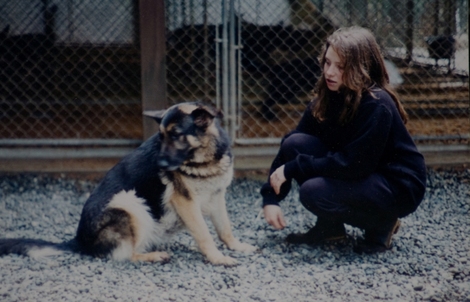 (1992-2003)
Karrie was one of our daughter dogs. They were inseparable. She had a very short show career as she really did not have the patients to stand there and get looked at. She wanted to spend her time with her pal Jodie, our daughter. I think in this picture Jodie said "do you want to go in a run??"
Good Bye sweet "Scary Karrie"

(1989-2001)
Bandit was a Min Pin. He was our small house dog. Our two daughters showed him in conformation when they were young. It takes a very special dog to be so small and still be able to fit in a house with German Shepherds. He did it just fine.
Bye for now "Little Dittle" 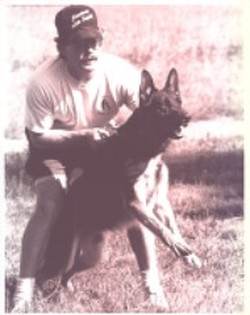 (1990-1999)
Gambler was a very large black and tan male dog. He was almost all black with just a bit of tan on his legs and face. He was the first dog we started working with in Schutzhund. We learned a lot with him. He acquired his Schutzhund I title, and he loved to do the protection work. Our training has come a long way since Gambler, and we will miss his deep bark and his drive to find the bad guy.
We miss you "Gumby" 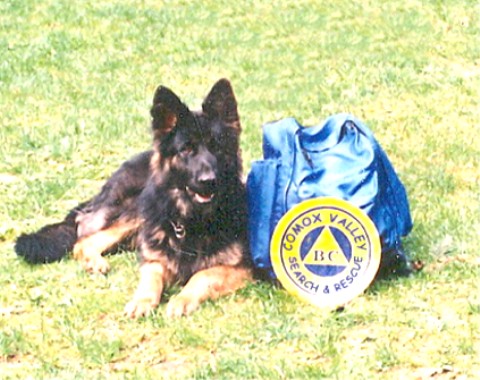 (1986-1997)
"Scandel" was a long coat female. She was the first Search & Rescue Dog for us. When we started her in Search & Rescue, she was a natural at it. From the first time she put her nose to the ground she knew, and so did we, that this is what she was meant to do. Scandel was not your most cuddliest dog. She was all business. When she had her harness on it was all work. She was one of the first RCMP certified civilian Ground Search & Rescue Dogs in BC. She was certified for nine consecutive years,  until she retired. Here is a tribute that we wrote for her.
Keep tracking "Scandelely"
SAYING "GOOD-BYE" TO AN OLD FRIEND
Thank you..............
For being with me for 11 years
For being certified for 9 years
For all those long nights searching
For all the times I'd taken you from your warm bed
For never giving up when you were covered with snow, mud, or ice
For still going when you were cut by barbed wire, glass or sticks
For continuing to work when you were so exhausted
For jumping over those logs when I asked, not knowing what was on the other side
For going into a room full of kids and licking every face
For the times I thought I was right, but you knew different
For that "sparkle" in your eyes when it was time to work
For trusting me........For making me trust you
And finally.. for leaving me quietly and peacefully in your sleep when you knew it was time
Thank you........................
MAY ALL YOUR SEARCHES IN "HEAVEN" BE HAPPY ONES 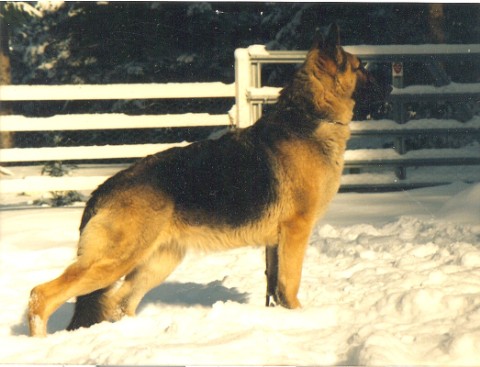 (1983-1997)
"Lucky" came to us as a very sick, ten day old puppy. We brought her home and started the task of raising her. Up every two hours to feed her for the first six weeks. We could not let her go without a fight. Fourteen years later she passed away. With such a bond with us, she thought we where her parents. Every where that we went Lucky had to be there. She received her C.D. title, but because she was always goofing around it was a bit of a task to make her take anything serious. She enjoyed dressing up and showing off. One time we did a doggie walk-a-thon to raise money for the Child Development Center and she presented the money on stage in a tin can she was holding in her mouth. All the great comedy is greatly missed.
Till we can hug again... bye "Muckamully" 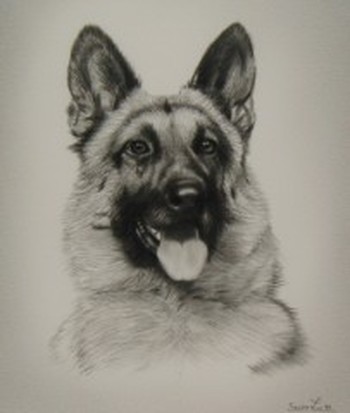 (1985-1993)
"Kount" was a big black & tan male dog. He was the next show dog for us. He received his Show Championship title very quickly. When he entered the ring, heads would turn. He enjoyed the show ring, and was always eager to show off for the crowd. Over the years, Kount sired many show puppies. He was a joy to live with, and a great  privilege to have known. This is a portrait done by Sam Lu. We feel this portrait is far better than any picture. Sadly we lost Kount when he was only eight  years old .
I know you are still struting you stuff dear "Kountdown von Sucky Sar" 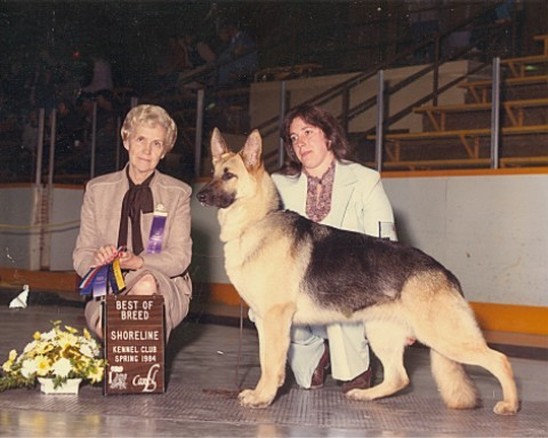 (1981-1993)
"Kizzy" was our first show dog. She acquired her  Show Championship title, her C.D., and her Canadian ROMC title. Kizzy was a very "lady like" female. Getting dirty or wet was out of the question. She liked the attention she got when it was show time, getting blown dry and nails done etc. The obedience ring was not her cup of tea, although she did do quit well, standing pretty was what she liked to do best.
Love you "Kizzy Kid" 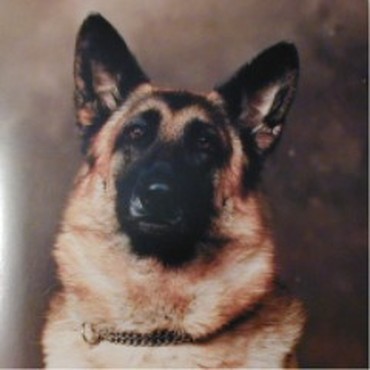 (1980-1992)
"Shiloh" was the first German Shepherd that started Broomeacres. She was a large black & tan female. Shilo tried everything, but the one thing that she succeeded at was the best family member that any one could ask for. She was still a puppy when we had our two daughters, so growing up together made the three of them the best of pals. They were always looking out for each other. She set a high standard for the rest of the dogs that followed.
Look after all the other animals.... our Dear "Baby Bo Shiloh"


In loving memory to these dogs, and all the dogs over the years that we have bred,
there is a special place in our hearts.
Proudly powered by Weebly